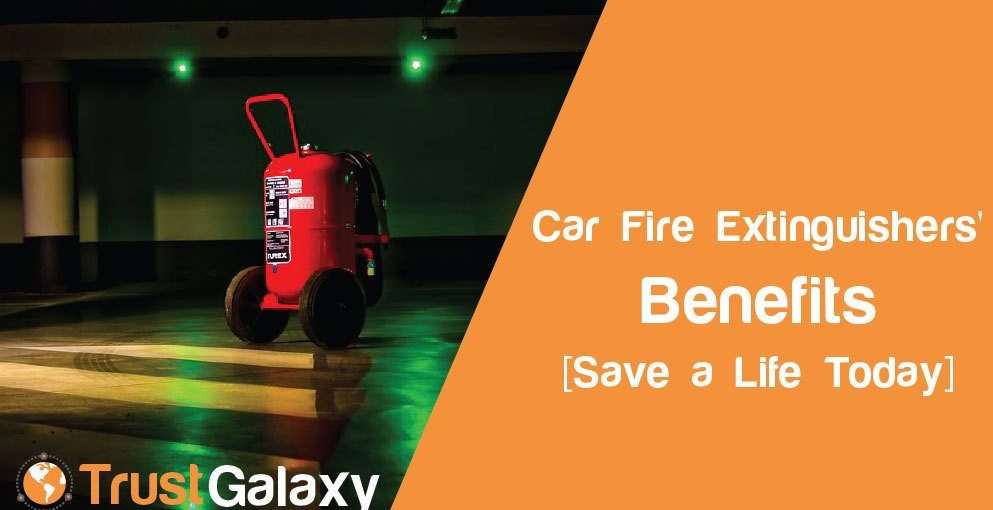 How many times have you heard you need to have a fire extinguisher in your home? Many times but what about your vehicle – do you need one in your car as well?

The answer is yes?!

Now, why do you think the number has come down? More people are using fire extinguishers in their car. A fire can break out in your car at any time. Having a car fire extinguisher in your vehicle can save your life and car. You do not want to end up being part of the fire accident statistics.

Another disturbing thing is some of these fires start without giving you a warning. Here we have stated the benefits for you to make sure you have a life-saving fire extinguisher in your car.

Advantages of Having a Fire Extinguisher in the Car

When your vehicle catches a fire, it only takes three minutes for it to burn out almost everything. This is just one reason why you have to have a fire extinguisher with you. We are giving you some other reasons why you need to have a top-notch extinguisher for your car- here are some other good reasons for you.

How many times have pushed your ride to revive the engine and spun those tires? Yes, we know you have done this many times. Did you know that by adding pressure during warm weather it puts a strain on the engine? Once heat builds up there, the parts fail and lead to a fire. Now, imagine you are riding on the highway, and this happens to you. Without a fire extinguisher to help you, your vehicle burns to a crisp and can cause your death. No one ever wants to face such deadly situation.

The electrical short circuit is one of the major causes of car fires and most of them starts with the car battery. When the battery gets charged it releases hydrogen gas. The gas gets accumulated beneath the hood. And if you have worn out wiring on the battery, it forms a spark and causes current that leads to a blazing fire. With the right car fire extinguisher, you can stop the fire before anything gets wrong.

From 2016 to 2018, there have been a bunch of reports on Ford Kuga catching alight, and it has caused some fatal deaths during these years. The problem is that fold builds them up from the ground and only detected the flaws after complaints.

When this came to limelight, it was already too late. In such situations, you may be able to prevent the fire if anything like this happens to you.

It Can Save a Life

Once your automobile flairs up and you grab your fire extinguisher to put out the fire. If you fail, your insurance will replace the car. However, there is one thing that cannot be replaced by anything. Yes, this is life. Imagine your loving puppy trapped in the burning car and you have nothing on your hand to put out the devastating fire. With this handy device, you can keep the fire under control until fire control arrives.

You Can Help Others in Distress

Imagine a car caught fire and someone shouting out for help while sitting in the car. If you face this scenario, most likely your Good Samaritan side will kick you hard to help like a magician. In that case, your simple fire extinguisher will turn into a magic wand. Hopefully, you will be able to control the fire within a while and save a life. Thus, you can be a real life hero by saving lives.

There have been many misconceptions about fire extinguishers in cars. The most common one is that it can explode when there is a high temperature in the vehicle and people also think one cannot put out a car fire with a commercial fire extinguisher.

The first one is not true at all. You can leave this handy and durable device in the back of your truck even while your car is in the desert. The second one is true to a certain extent. But if you have a top-notch fire extinguisher in the car, which is suitable for Class A, B, and C types of fires, the second conception will also turn into a misconception as well.

In January 2018 in Hillside, NJ, a homeowner woke up hearing a massive sound in her home. It was around 2 AM, and she heard an explosion. She got out of bed and looked through the window and she was not ready for what she saw. A vehicle crashed into her house on fire. Immediately, she ran downstairs with her fire extinguisher and started putting out the flames while waiting for the fire control squad. Once they arrived, they noticed that the fire was aleardy out and the man was rescued from the vehicle. The driver did not experience any severe injury and the home received minor damages.

In TULSA, OK, an onlooker witnessed a car crash and one of the vehicles went into an apartment complex. He saw the car going with high speed on the highway and suddenly it crashed with an SUV. The SUV went off the roadway, went through the median, and hit the complex. The vehicle caught fire immediately. The bystander grabbed a portable fire extinguisher and put the fire out. The firefighters said, “The driver is lucky and could have lost his life if the bystander did not help out.”

These are only two stories of people’s lives saved by brainy people using car fire extinguisher – here are many more.